Otherstory artists created a shadow and light installation as part of Common Wealth Theatre’s Our Glass House in April 2012.  The show was set in a disused house, and dealt with domestic abuse.  The show was made in Bristol and subsequently toured the UK.

The installation was in the room inhabited by Sufiya: one of the show’s six characters.  Watching eyes circled the walls from a revolving lamp. The table became a light box where Sufiya told stories with objects, projecting them onto the ceiling.  The curtains opened to reveal a series of animated films, charting her relation with the world outside. 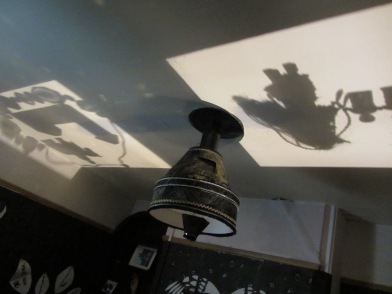 From reviews of Our Glass House:

The programme [has a] varied list of design collaborators, and their work pays off. Beautiful shadow play, puppetry and projections happen in Sufiya’s room, an Indian character who speaks no English, hiding messages behind lift-the-flap slits in the luxurious wallpaper.

Effective and affecting, Our Glass House is a wonderfully inventive site-specific production from theatre collective Common Wealth like no other I have ever seen in Bristol. It is a superb use of space, part art installation, part performance, so prepare to get lost in thoughts and lost in this house and its secrets.